Garden games for children and adults 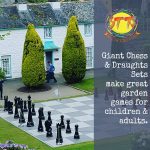 Garden games for children and adults can be hard to come by.  This is one of the reasons we developed our giant chess and draughts sets.  The set allows children and adults to play together in a game of strategy whilst simultaneously having a lot of fun.  One of the most famous giant chess sets is located in Wales in the beautiful garden in Portmerion.  Portmerion is world famous as one of the designs by the visionary architect, Clough William Ellis. One of our staff was there during the summer and took the stunning photograph below as some inspiration.  It’s a great example as to how to get the chess set to fit into a formal garden.  In reality the chess set looks amazing and actually adds to the design of the garden snuggled in amongst the hydrangeas.

Checkers or draughts have been around for centuries (around the 16th century). Draughts were originally introduced into Europe (from Egypt).  From recorded monumental inscriptions, it seems that the game was familiar to the Egyptians as early as 200 B.C. !   Our giant draughts garden version means that everyone can get involved. It’s simple to play, easy to understand and addictive. Our families report that all of their family members wanted to play!  With this massive version you can play with 2 players, or in teams so it’s great for family get togethers. Our set comes complete with a full set of queening rods.  This makes moving the draught pieces, once queened, simple and effortless.

The ultimate game of strategy is Chess.  From what we know of its origins, it came from India in around the 6th century A.D. (Although there is ongoing debate as to whether it originated in China first).  It then spread to Persia, Spain and into Europe.  Chess is played on a black and white board with black and white pieces, similar to draughts. The board represents a battlefield in which two armies fight to capture each other’s king.  A player’s army consists of 16 pieces that begin play on the two ranks closest to that player.  There are six different types of pieces which are; king, rook, bishop, queen, knight, and pawn.   The pieces are distinguished by appearance and by how they move.    White moves first, after which the players alternate turns in accordance with fixed rules. Each player is attempting to force the opponent’s main piece, the King, into a checkmate.  Checkmate is a position where it is unable to avoid capture. You can get your own giant garden chess set here.

One thought on “Garden games for children and adults”